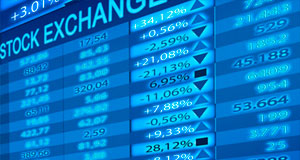 Stock markets in Europe ended the day in the red as concerns about global trade weighed on sentiment.

President Trump defended his use of tariffs against China as a tactic to try and rebalance the trading relationship, and Beijing dug their heels in too, as China made it clear they are happy to hold their equally stern stance. Yesterday was a reminder that the two largest economies in the world are engaged in a trade spat, and some dealers reduced their positions in the equity markets.

After the European market close, President Trump reaffirmed his view that he will impose tariffs on $325 billion worth of Chinese imports if a deal isn’t reached. Mr Trump has made it clear that the trade war will ratchet up if Xi Jinping doesn’t show up at the G20 meeting later this month. Trade concerns are likely to persist in the near-term, but we might not see major moves in global stock markets until the G20 summit, when the two leaders are expected to meet. US equity markets closed a little lower last night.

The US inflation rate slipped to 1.8% from 2%, and economists were expecting 1.9%. The core reading slipped from 2.2% to 2.1%. The fact the cost of living dipped suggests that demand is cooling, and some investors might view that as a sign the US economy is slowing down. There has been a lot of speculation that the Federal Reserve will trim rates later this year, and the CPI report could be used as a prompter for the Fed to intervene.

Asian equity markets were largely lower as trade tensions hit sentiment. Recently, there have been protests in Hong Kong over a controversial extradition bill, and that has dented domestic investor confidence too.

The latest jobs report showed that the unemployment held steady at 3.6% – a 50 year low, and that average earnings cooled from 3.2% to 3.1%. A slowdown in earnings fjf isn’t ideal, but in light of the drop in headline inflation yesterday, it still leaves US workers in good shape as their real wages are still at respectable levels. Some traders feel that all the speculation about the Fed cutting rates in the coming months is overdone.

The political fight between Italy and the EU over public finances is still bubbling away. The Italian administration could be on collision course with Brussels. Matteo Salvini, the joint deputy prime minister wants to bring in tax cuts, while Giuseppe Conte, the prime minister, predicts that the national debt will be able to be reduced by more than exfjpected as tax receipts were higher than predicted.

The oil market sold-off severely in the wake of the Energy Information Administration report which showed that US inventories jumped by 2.2 million barrels, while traders were expecting a draw of 480,000 barrels.

The German CPI rate is tipped to hold steady at 1.3%, and it will be released at 7am (UK time).

The Swiss National Bank (SNB) will release its interest rate decision at 8.30am (UK time), and the consensus is for rates to hold steady at -0.75%. The Swiss franc has been in demand recently as traders have being seeking out safe haven assets to avoid the volatility in global stocks. The SNB might use dovish language at the press conference that follows at 9am in a bid to take some of the heat out of the franc.

The eurozone industrial production report will be released at 10am (UK time), and it is tipped to show a decline of 0.5%.