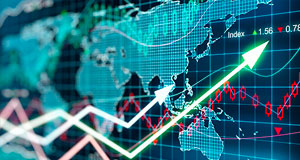 Continental Europe came off worse as the DAX 30 lost nearly 1%, and the CAC 40 fell over 1%, while the FTSE dropped by 0.55%. Traders in this part of the world continue to monitor the situation in the US, where the majority of states continue to see the number of new Covid-19 cases increase. As of yesterday, the number of confirmed cases in the US exceeded 3 million. On Tuesday, the WHO cautioned there could be an increase in the fatality rate as there has been a rise in infections, but the death rate so far has lagged.

US-China tensions were doing the rounds yesterday. The decision by the Chinese government to introduce the national security law in regards to Hong Kong has sparked criticism from many countries around the world as it chips away at the principle of ‘one country two systems’. Yesterday there was speculation the US government would hit back at Beijing by potentially undermining the Hong Kong Dollar (HKD) peg. It wasn’t that long ago that President Trump reiterated that the US-China trade deal was intact, so going after the HKD might be a useful tactic. The US leader might be hesitant about taking a very tough stance against the Beijing administration given that he’s not doing well in the polls and the Presidential election is in November.

The mini-budget from Rishi Sunak, the UK’s Chancellor of the Exchequer, made big political headlines yesterday, but it didn’t have a significant impact on the markets. Mr Sunak revealed £30 billion worth of schemes that are aimed at providing assistance to the UK economy. The furlough scheme will come to an end in October and £9 billion will be allocated to job retention. There will be a temporary cut to VAT for the tourism and hospitality sector. In addition to that, there have been incentives offered for dining out too – the combined stimulus is worth £4.5 billion. Providing help to the battered hospitality sector is a sensible move, but people in the UK might be cautious about socialising given what has happened in places like Melbourne and the US in relation to a rise in new cases. As expected, the stamp duty threshold was upped to £500,000 from £125,000. One could argue that this tactic might not be as fruitful as the government are hoping as some people are likely to be cautious about purchasing a property on account of the huge economic uncertainty.

The health crisis in the US remained in focus. Oklahoma, California and Tennessee all posted a record daily rise in the number of new cases. States like Florida and Arizona continue to see higher case numbers too. Despite the pandemic, US equity benchmarks closed higher as the tech sector continued its bullish run. Amazon, Apple and Netflix all set new record highs. Raphael Bostic, the head of the Federal Reserve of Atlanta, said that some of the fiscal support programmes might need to be extended.

Overnight, China posted its CPI data for June and the level was 2.5%, while economists were expecting 2.5%. Keep in mind the May reading was 2.4%. The PPI metric was -3%, and the consensus estimate was -3.2%, while the previous update was -3.7%. The improvement in the PPI rate might bring about higher CPI in the months ahead. Stocks in Asia are up on the session, and European markets are being called higher too.

The US dollar came under pressure yesterday. It was a quiet day in terms of economic data so the move wasn’t influenced by economic indicators. Lately the greenback has been a popular safe haven for traders, it was showing losses during the day when European indices were in the red, and when US stocks were flickering between positive and negative territory.

Gold was given a hand by the slide in the US dollar. The metal topped $1,800, and it was the first time since September 2011 that it traded above that mark. The commodity is still popular with certain traders as there are concerns that a second wave of Covid-19 could be on the cards. The metal’s positive move is being partly fuelled by the belief that central banks will maintain very loose monetary policy. Some people are afraid an inflation rise is in the pipeline, so that is influencing gold too.

At 7am (UK time) Germany will post its trade data for May, and the imports and exports are tipped to be 12% and 13.8% respectively.

The US initial jobless claims is anticipated to fall from 1.42 million to 1.37 million. The metric has fallen for the past 13 weeks in a row. The continuing claims reading is tipped to drop from 19.29 million to 18.95 million. Keep in mind that last week’s reading actually ticked up. The reports will be posted at 1.30pm (UK time).

A eurogroup video conference meeting will be held today and traders will be listening out for any potential progress being made in relation to the region’s recovery fund.

USD/JPY – has been drifting lower for the last month and support could come into play at 106.00. A rebound might run into resistance at 108.37, the 200-day moving average.