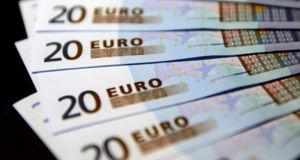 EURUSD found a reason for correcting; investors are processing FOMC Meeting Minutes along with the statistics.

The major currency pair is falling a little bit on Monday. The current quote for the instrument is 1.1330.

The Unemployment Rate in the US dropped to 3.9% in December after being 4.1% the month before. The Average Hourly Earnings added 0.6% m/m, more than expected. It was good news for the “greenback”.

However, the next report turned out to be disappointing. The Non-Farm Payrolls showed only 199K after being 210K in the previous month and against the expected reading of 400K. It appears that the December reading didn’t go anywhere from the November one.

The Participation Rate remained at 61.9%.

Despite the NFP report, which was rather questionable, the labour market data was stronger than expected.

Market players are still processing the December FOMC Meeting Minutes. The document says that the regulator didn’t exclude a possibility of decreasing its own balance right after the rate hike. In addition to that, the Fed is expected to close the QE programme as early as March instead of June as it was announced in the past.