Markets overview. UK retail sales to get a euro 2020 boost? 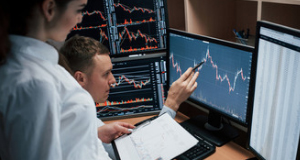 The recovery from the Monday sell-off continued apace yesterday, with the FTSE100 being the notable party pooper, slipping back due to weakness in 3 to 4 of its bigger cap stocks, while the rest of Europe closed higher for the third day in succession.

US markets, and in particular tech stocks led the way, with the Nasdaq 100 closing at a new record high, with the S&P500 just falling short.

This positive finish should translate into a higher European open despite a weaker Asia session, and with Japanese markets closed.

Yesterday’s ECB meeting didn’t provide much in the way of excitement with ECB President Christine Lagarde once again talking a lot while saying very little.

The new forward guidance merely outlined that the ECB was likely to be ultra-accommodative for a long time to come, and if anything was the equivalent of giving a rather battered old car a new paint job, and a quick engine tune-up. It looks nicer but it’s still the same old banger underneath.

Today the main focus is likely to be on the latest July flash PMI numbers from France and Germany for manufacturing and services, and given the recent flooding across Germany, as well as Belgium and the Netherlands they may not be too instructive.

We have seen most of Europe slowly easing restrictions in recent weeks and the end product of all that has been an increase in economic activity, although services activity continues to lag a touch, with manufacturing outperforming.

German manufacturing has performed well, posting levels above 60 every month this year, apart from January, and this looks set to continue today with a slight decline from 65.1 to 64.1.

Services activity has been much more of a slow burn, although in June we saw activity hit a three-year high, with expectations for another improvement today to 59.5

In France we also saw services activity hit a three-year high, as lockdown restrictions got eased, and this looks set to improve again to 58.8, while manufacturing could slow to 58.3 from 59.

The biggest concern now is that a slowdown in the global economy and the recent easing of monetary policy by China speaks to a concern, that in Germany especially this could be as good as it gets for PMIs as we head into Q3.

In the UK, despite the delay in easing lockdown restrictions in June, there appears to be little expectation of a rebound in retail sales after the surprise -1.4% decline seen in May. This is a little surprising even if you take into account the strong numbers in March and April. Expectations for May were for a rise of 1.5% so the estimates could not have been more wrong.

The fall was all the more unexpected given that a corresponding BRC retail survey showed a decent outperformance for the same month, with figures showing that May sales increased at their best rate since the pandemic struck the UK.

Total sales for May increased 10% compared to 2019, and by more than the same number in April on a two-year basis, with clothing retailers the biggest beneficiaries of a return to the High Street.

It was speculated that the bad weather at the beginning of May could well have impacted demand, while forward bookings for hotel accommodation in the leadup to the May reopening weren’t probably as strong as originally thought in the lead up to the half term break, which may help explain why the ONS number for May was so poor.

As we look towards today’s June numbers, and a decline of -0.1%, there is concern that the delay in relaxing restrictions might have knocked confidence, however the latest British Retail Consortium (BRC) retail survey for June showed that was far from being the case.

According to the BRC, UK retail had its best quarter on record with spending in June rising by 13.1% against a decline of 1.9% in June 2019. Food and non-food sales were strong due to Euro2020, and other sporting events prompting additional spending.

With more people being encouraged to holiday at home the delay in lifting travel restrictions could also act as a boost as more people book a domestic break instead.

We also have the latest UK flash PMIs for July; however, we do seem to be seeing increasing divergence between what the PMI numbers are telling us and what we are seeing from the ONS data.

While manufacturing and construction surveys have come in above the 60 level for the last three months, the official ONS numbers have shown much weaker economic activity. The same divergence appears to now be manifested in the services data, which has remained strong, while retail sales numbers showed an unexpected decline in June.

Today’s numbers for July are expected to show fairly decent readings once again, however given recent trends, we do have to start treating these PMI numbers with slightly more caution given that they also exclude some important parts of the economy that are continuing to struggle.

GBPUSD – found support above the 1.3570 level and February lows on Wednesday. We need to see a recovery back above the 1.3800 level to stabilise and minimise the risk of further losses.