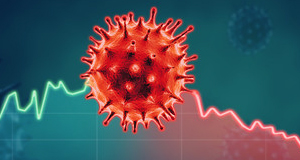 Yesterday saw markets undergo a period of introspection, as further positive news about the Pfizer vaccine offset concerns about the increasing economic damage set to be caused by further restrictions and lockdowns, as infection and hospitalisation rates continued to rise.

While markets in Europe managed to eke out some modest gains close to their recent highs, US markets slipped back for the second day in a row, after New York mayor Bill de Blasio announced the closure of schools in response to the rise in cases. With mortality rates starting to rise again in Spain and Italy, the US passing 250,000 deaths, and infection rates rising to a record level in Japan this northern hemisphere winter looks like being a long and dark one.

The late sell-off in the US looks set to translate into a softer open here in Europe later this morning, after another mixed Asia session, and this is where investors need to make a calculation in balancing the risks of the virus, vs the vaccine.

With infection and hospitalisation rates rising, and the risk that current lockdown restrictions either remain in place, or get extended into 2021, the probability that any economic damage will become permanent is only likely to increase. These risks then need to be offset by the longer-term benefits of a workable vaccine, which even if starting to get rolled out next year, could take up to two years to really make a difference.

What’s particularly notable about the rally in Europe this month has been the relative underperformance of the DAX, which has lagged behind the likes of the Spanish IBEX, Italian FTSEMib, which are both up over 20% month to date, and the France CAC40 which is up over 18%.

This outperformance probably has more to do with the fact that the German benchmark has more or less pulled back its losses for the year, while the likes of France, Italy and Spain have seen their economies hit much harder as a result of the pandemic, and as a result are still well below the levels, they started the year with.

When combined with the positive news about the vaccine, these markets have slightly more ground to catch up, as the more beaten up sectors start to look slightly more attractive, for, and when any possible vaccine program starts to get rolled out.

The US dollar has continued to come under pressure, slipping for the fifth day in a row, though it still remains above the lows we saw at the beginning of the month.

The pound continues to be buoyed by the prospect that EU and UK negotiators are within touching distance of agreeing a trade deal by the middle of next week, though it always pays to be cautious at taking reports like these at face value.

One move that has slipped below the radar a touch this month has been the rise in the price of Bitcoin, which hit a three year high just above $18,000 yesterday, as it looks to retest the record highs of December 2017, just below $20,000. While a lot of scepticism still surrounds crypto-currencies, some in the investment community appear to have warmed to them, with a number of funds being launched this year, in order to take advantage of the move towards digital currencies, as part of a broader portfolio mix.

On the data front we’ve got the latest weekly jobless claims numbers which are expected to come in at 700k, a modest decline from 709k, with continuing claims set to fall back to 6.4m, from 6.78m.