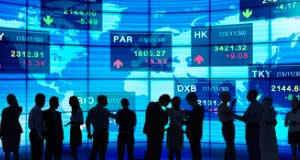 Overnight stock markets in China lost ground on the back of renewed fears surrounding the coronavirus situation.

Yesterday there was hopes the crisis was being stemmed, but in the past 12 hours the perceptions have changed. There were a spike in the number of cases in the Chinese province of Hubei – the epicentre of the emergency, so equities in mainland China as well as Hong Kong fell. European equity benchmarks are called lower.

Equity markets pushed higher yesterday as trades felt the health crisis in China was starting to come under control. According to a medical report from, the number of additional confirmed cases fell to its lowest level since the emergency took hold. That update acted as a greenlight to the bulls.

Stock markets were in relatively strong position at the start of the week, so when the news flows gave the impression the Chinese government were starting to obtain control of the situation, dealers bought further into the market. At the height of the panic selling at the very end of January, there were fears that great swathes of China would be on lock-down for prolonged periods, but now businesses are going back to work.

The FTSE 100 hit its highest level in nearly three weeks, while the DAX set a new record high. The mood on Wall Street was bullish as the Dow Jones plus the S&P 500 hit fresh all-time highs. Conversely the volatility index (VIX), which is often called the ‘fear index’ fell back to its lowest level since late January. It’s no surprise the VIX has tumbled while the S&P 500 hit another record-high, but it acts as confirmation that uncertainty in stocks is in decline.

The oil market was a major beneficiary of the change in sentiment surrounding China. Dealers drove the energy market higher on signs the health crisis in China is slowing down. The nation is the biggest importer of oil in the world so the oil market has had a horrendous few weeks on account of fears that Chinese demand would fall off a cliff, but now perceptions of China’s future demand have changed greatly. In the afternoon session, the Energy Information Administration report showed that US oil stockpiles jumped by nearly 7.5 million barrels – this chipped away at some of the lofty gains that were made earlier in the session.

The euro came under pressure yesterday as it lost ground across the board. The single currency fell to its lowest level versus the US dollar since May 2017. There was little in the way of economic news form the eurozone, the region’s industrial production report showed a 2.1% fall in December. The indicator isn’t hugely important, but the reading was desperate.

Yesterday Jerome Powell, the head of the Federal Reserve, testified in front of the Senate Banking Committee. The central banker said he sees more upside in the labour market participation rate which is an optimist view of an already robust jobs market. Mr Powell expressed concerned about the level of US debt. Outstanding loans need to be repaid at some point, and being overly reliant on debt to fuel growth will catch up with you at some point. The Fed chief said the impact of the coronavirus outbreak will become apparent in the economic data ‘fairly soon’.

German CPI will be posted at 7am (UK time) and economists are expecting the reading to hold steady at 1.6%.

The US inflation data will be in focus too as the headline CPI reading is tipped to tick up to 2.4% from 2.3% from the core reading is expected to slip to 2.2% from 2.3%. The core metric is deemed to be a more accurate gauge of underlying demand. The reports will be revealed at 1.30pm (UK time).