Analysis EUR/USD. The Euro is fighting for yesterday’s losses 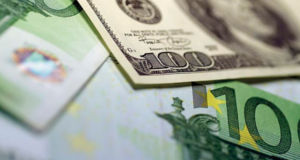 In the middle of the week, the major currency pair is recovering after yesterday’s losses; investors are analyzing the Fed’s intentions.

EURUSD is growing on Wednesday afternoon, but investors are very cautious. The current quote for the instrument is 1.0987.

Demand for the USD is not as active as before, because investors’ hopes for successful trade negotiations between the USA and China are fading: there was no new information relating to the trade talks. As a result, market players switched to other assets, thus helping the major currency pair to recover.

While delivering the speech yesterday, the US Federal Reserve Chairman Jerome Powell told about the regulator’s intentions to expand its portfolio of government-backed securities. It is about Treasury Bills, but investors are sure to take it as some kind of “compact” QE. Powell himself explained several times that this procedure was necessary for recovering the regulator’s balance, not for supporting the financial system. Nothing was said about the program volume, but Powell mentioned that it wouldn’t be too big.

As a result, the Fed’s “printing press” is on again. The cash liquidity will increase a bit (investors would like to know by how much and that might be announced later). In this light, the USD may fundamentally weaken a little.