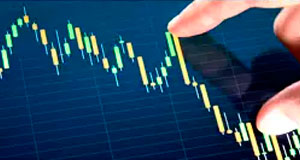 Eurozone stocks largely finished lower yesterday on the back of the update from the European Central Bank (ECB).

Interest rates we kept on hold, which met traders’ expectations, but the update from Mario Draghi,, the head of the ECB, wasn’t the dovish update that many were expecting.

Going into the meeting, some traders thought the ECB would try and outflank the Federal Reserve – who are open to trimming rates later this year, and issue a dovish update but there were some mixed views in the announcement. The 2019 GDP and CPI forecasts were 1.2% and 1.3% respectively, while at the March meeting they were 1.1%and 1.2% respectively. The 2020 GDP forecast was lowered to 1.4% from 1.6%, and the CPI prediction was cut to 1.4% from 1.5%. It wasn’t the first the central banker cautioned that risks are tilted to the downside, but he said rates will be kept unchanged until the first-half of 2020 – which seems optimistic given that India and Australia have cut rates, and the Fed recently opened the door to the idea of reducing rates.

The eurozone is in a far worse condition that the US and the ECB doesn’t seem that worried about holding it current monetary policy. A few more detail were given about the new targeted lending scheme which will kick off in September. Rate for banks will be between 0.1% and -0.3%, depending on how much they lend – but investors aren’t holding out a major amount of hope. It seems to me the ECB won’t want to admit that they stopped the bond buying scheme too soon.

The euro rallied on the back of the Draghi update, and in the near-term we might see the single currency hold its ground as the central bank have made their position clear. The currency bloc still has it economic and political problems – Italy has the potential to trigger another debt crisis, but for the time being the euro is likely to hold firm.

US equity markets finished higher as US-Mexican trade discussions are heading in the right direction. President Trump threatened to impose 5% tariffs on all imports from Mexico unless the country tightens its border with the US. Mexico’s ambassador to the US, Martha Barcena Coqui, said that negotiators had a ‘very good debate’, and that boosted US stocks, but Vice President, Mike Pence, claims the tariffs will still come in effect on Monday. Investors are hoping the measures the Mexican government are taking will be enough to prevent the levies from being introduced.

Chinese markets were closed today as the country celebrated the Dragon Boat festival, but the Nikkei 225 pushed higher as the feel good factor from the US spread east. The standoff between the Trump administration and China still continues, and this week Mr Trump said tariffs could be imposed on ‘at least’ another $300 billion worth of Chinese imports.

German industrial output will be released at 7am (UK time) and the consensus estimate is for a decline of -0.4%, and that would be sharp fall from the 0.5% increase in March. The trade numbers will be released at the same time, and the budget surplus is tipped to drop to €18.6 billion, from €20 billion in March. The German manufacturing sector is deep contraction, as global trade tensions linger, and dealers will be paying close attention to the exports component of the trade figure ,as it will give a gauge of global demand.

French industrial output is expected to rebound and grow by 0.3% in April, and the trade deficit is expected to drop from €5.3 billion to €4.9 billion. The figures will be reported at 7.45am (UK time).

The Halifax UK house price index is expected to show a decline of 0.2% in May on a monthly basis, and that compares with a 1.1% increase in April. The report will be released at 8.30am (UK time).

The highlight of the session will be US jobs report which will be revealed at 1.30pm (UK time). The consensus estimate is 185,000, and keep in mind that 263,000 jobs were added in April. The unemployment rate is at a 50 year low, and it is tipped to hold steady at 3.6%. The yearly average earnings is tipped to remain at stay at 3.2%.

The wages component is becoming more important these days as workers who earn more usually spend more, and that ploughs money back into the economy. US CPI is 2%, so workers are getting a nice increase in real earnings. The ADP employment report on Wednesday showed that only 27,000 jobs were added last month. On the surface it appears awful, but it might suggest the companies are finding it difficult to attract new staff, and firms might to resort to offering higher salaries. Should today’s average earnings tick up, it would imply the labour market is tightening, and employers might have to up their offers to attract staff.

Canada will announce their jobs data at 1.30pm (UK time) too. The unemployment rate is tipped to remain at 5.7%, and the employment change is expected to show that 8,000 jobs were added. Like the US jobs report, the devil is in the detail. Traders will be looking at how many full-time and part-time jobs were added or lost. Last month’s report showed that average permanent employee wages was 2.57%, and investors will be keeping an eye on that too. The recent plunge in the oil market is likely to hit the Canadian economy in the months to come, and it might prompt the Bank of Canada to adopt a slightly more dovish stance.

Theresa May will step down as leader of the Conservative Party today, and that will heat up the Tory leadership race. Mrs will stay in the top job, and the process of finding her successor will dominate political headlines. The markets have a way of cutting through the political noise, and volatility in sterling is only likely to pick up when it becomes clear who is likely to be moving into 10 Downing Street. The candidates view on what sort of Brexit they are in favour of will be the focus of dealers attention.

GBP/USD – has been driving lower since mid-March, and if the bearish move continues it might encounter support at the 1.2600 region. The 1.2800 area might act as resistance.